A passion for nature and landscape photography

I had a short holiday between Chrismas and new years eve. A great opportunity to spend a week in the photo studio. Of course I was curious how it would all work out. I also had to find out what the best approach is to coordinate the light sources and get a right balance. I had prepared myself by reading internet articles and watching videos on YouTube, but the practice is usually a bit different.

For the first shoot I chose a still life of a bottle of wine and a filled glass with some fruits and a candle.
I opted for a black background and a main light via a 60×60 cm softbox on the left at the same height as the subject. I first tweaked the power setting of this light until I had the desired result. Then I used a 95 cm octabox on the right side, which I pointed diagonally from the top. After I had found the desired balance there (the modelling lights on the flash do help you to find the right balance) I took a number of photos, but I found that something still was missing. I then focused an LED panel in the background. The picture below is the final result.

On the second day of my week in the photo studio, I took a bottle of Bacardi from the cupboard to get started with product photography. o be honest, I have to say that I ‘borrowed’ the idea for this photo from Karl Taylor who has a lot of videos on YouTube where I gain a lot of knowledge for studio photography.
For this photo I placed the 40×180 cm softbox to the left of the bottle. Behind the table is a difusser screen behind which is a second flash with a standard reflector. I put the bottle on a perspex mirror plate. After I found the right light balance again, I wet the bottle with a spray bottle with a mixture of 50% glycerine and 50% water. The glycerine ensures that the drops do not immediately drip from the bottle but ‘linger’ for a while. Another a trick that you find somewhere on the internet. Then I took the final set of photos.

I post-edited the photo in Photoshop to smooth out the transition between the mirror plate and background.
There were some annoying creases in the fabric of the diffuser that I also removed. Then I blurred the background with Gaussian blur because the structure of the canvas was also visible, especially in the foreground of the photo. You can’t see that after that because of the applied blur.
Finally, I adjusted the white balance in Lightroom so that the whole image got a cooler (bluer) look, I reduced the highlights a bit, reduced the shadow slightly and finally added a light vignette.

Below the photos of the setup and the end result. Lesson learned is that I should use tethered photography more in the future. You then connect your camera to the computer where you can operate the camera from the computer, but you can also immediately see the photo taken. The advantage is that you see the result larger than on the small screen of the camera itself. I only found out afterwards that the bottle actually had to be turned a little bit to get the label nicely in view. I have now added a laptop stand to my studio equipment.

The third day in the studio I did not use the flashes and background. I collected shells from several beaches during the summer in preparation for this session. I sprinkled sand on a plate and lit the shells as desired with fixed LED lamps. For one photo I also used a garland with very small LED lights that I still had lying around.
In this session I used the set of extension rings in combination with my Canon EF 100mm F/2.8 L lens for the first time . By applying such rings you can zoom in even further on the details of the subject. The thicker the extension ring, the further you can zoom in. Of course you will lose light as a result, which you have to compensate with a higher ISO (not my preference) or a longer shutter speed. Given the fact that the camera was on a tripod, a slower shutter speed was no problem. In the gallery below the results of this shoot are presented.

All in all, I had a great time in my week in the photo studio. Now I have to find a patient model so that I can get started with portrait photography, because I want to try that too. 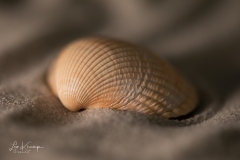 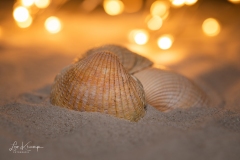 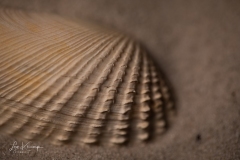 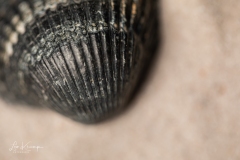 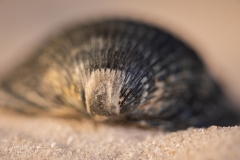 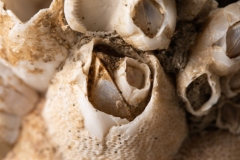 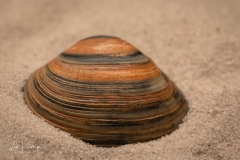 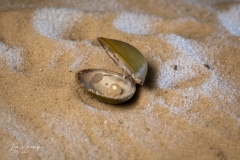